First, I hope every Dad out there had a really nice Father’s Day, and got to spend it with family and loved ones. We had a good day here. I made breakfast for the BaldMan: homemade biscuits and sausage gravy (with homemade sausage) with fried eggs, and a Bloody Mary. I think I pretty much nailed the sausage gravy, although starting with our good sausage certainly helped. I swear I must have been a Southern girl in a former life. I love so much Southern food: grits, sweet tea, biscuits and gravy, fried chicken. The BaldMan put some nice St. Louis ribs on the Big Green Egg to smoke, and I made an Israeli couscous, dried cranberry, and almond salad. We had a tossed salad, also. It made a good dinner.

Jill and John bought a house in Norton, MA. They closed toward the end of May. We are going down there to see the house tomorrow. Jill is making a belated Father’s Day dinner for her father, also. It will be nice to visit with them, and, of course, to see Carter. I found a couple of kids bikes in the basement that we are taking down for him. One is a small foot powered bike, and the other is a classic red tricycle. Both will need to be scrubbed up, but seem to be in good working shape. The tricycle could probably use some wheel grease, also. He should have fun with those.

On Wednesday, the  BaldMan goes for his six week checkup on his knee with his surgeon. On Tuesday, he has what will probably be his last outpatient physical therapy. He’s doing pretty well. He’s been on the elliptical every other day or so, and we went out for a bike ride today. He headed home a bit earlier than I did, but did pretty well. He says that “spinning” motion feels really good. I know it has to be better, because he doesn’t limp now, and I don’t hear all the exclamations of pain like before the surgery.

After that, we are going to ride up to Wells, Maine to talk to the woman who runs the Maine State chili cook off. We are once again going to be Chief Judge and Scorekeeper, and this year, we are going to be a two day cook off again. It was a two day for a long time, but in recent years, it dropped to just one day. We will have the Maine State cook off on Sunday, and will make Saturday the Joe Harvey Memorial cook off. It will be named for the man who was the Chief Judge there for many years, until he died a few years ago. We are heading up there to discuss adding the new Homestyle category to the cook offs. This is a late season cook off, so many of the cooks will have qualified in red already, and may be interested in adding Homestyle to their wins. It can also be a good way to drum up some interest in local cooks, since this is pretty much an anything goes, as long as it is chili category. We think it can be made self-funding, so that should be attractive to the organizers. At any rate, Wells is a pretty town, and I like going there.

I’ve been working outside again, when the weather lets me. We’ve had more rain, so I haven’t been out every day. But  I got more trimming done, and a few other things. On Saturday, I gave the pond a good clean out. I have to do that every few years. I pulled all the plants out and drained it most of the way. There are a few small fish still in there that the heron didn’t get last year, so I couldn’t empty it. I got the dead leaves off the bottom and cleared as much as I could, trimmed back the roots of the plants, and refilled it. I found a whole bunch of these in there:

It’s a dragonfly nymph. They do eat some tiny fish, but also mosquito larvae, so they are okay, if ugly.Dragonfly adults are pretty in a way, with the bright colors they can be, but their faces are just as scary as these guys.

It looks so much better now. 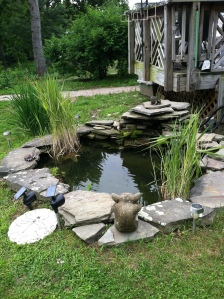 There’s more work to be done- more trimming, and some things need to be split and replanted. And, of course, once it’s all done, it starts over again. But that is the joy of landscaping, isn’t it?