We added a wreath on the door to our Christmas decorations this year. We’d looked at some earlier, but anything that was more than a couple pine cones stuck into the side and one of those red-flocked bows was really, really pricey. I knew I could make one cheaper. We got a really good deal on the wreath itself, which is nice and full and thick and heavy. It was on a display at Market Basket marked $14.99, but when it rang up, we got it for $5.99! We got the decorations at Michaels. Most were 60% off. We did buy some stuff I didn’t use, but you never know what’s going to look best. I think it turned out rather nicely. 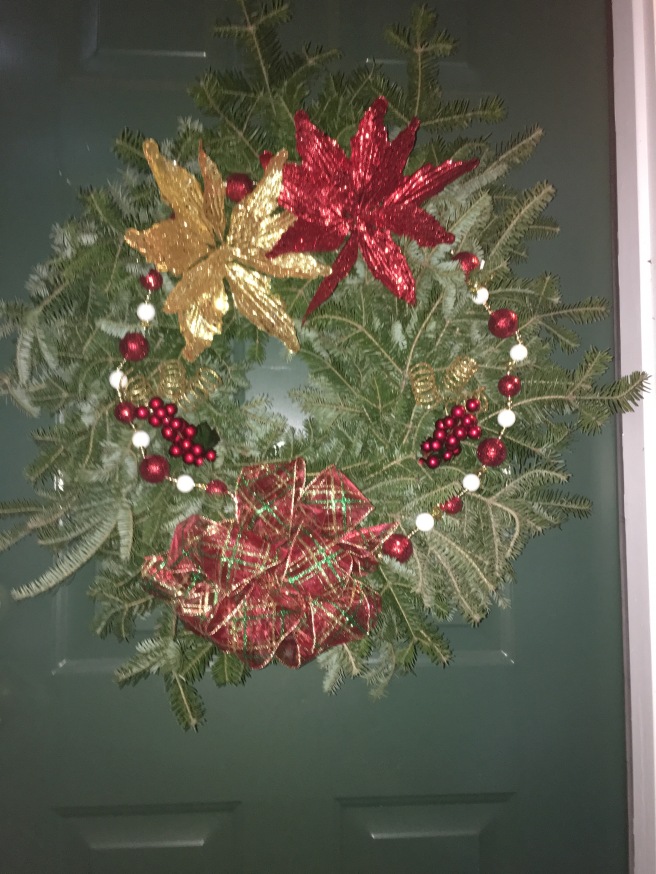 We are probably going to get our tree this weekend. We’ll go to Lawndale Farm in Tyngsborough, MA. We know the family, and they always have such pretty trees. Check them out if you are in the area, and are looking for a really nice tree.

I’ve been (very) slowly getting more Christmas decorations out of the basement. I suppose I should step it up a bit, or it will be post-Christmas, huh? I did get the window candles out, and a few other things. It will be interesting this year, since we are in a new place. Some things will go where they usually do, but some will need to find new homes. I will probably rearrange a few times, but it will get done.

It’s getting to be that time of year again, isn’t it? New year, new directions, new ideas. I need to take some time to sit and think about how to move forward with my projects. Things are a bit stalled right now, and I suspect it’s partly because I haven’t a clear picture of where it’s all going. I sometimes need to have a goal in sight, even if I miss it. Otherwise, the procrastinator in me takes over. I just found a plan that I think, with a few adjustments, might be a workable starting point for me. So, one of this week’s goals is to take some time with a calendar and the plan in hand, and do some organizing and some goal-setting. Gee, sounds like New Year’s stuff, doesn’t it? But, then, I suppose if I am going to get started for the new year, I have to know what I’m starting, don’t I?

It’s getting colder these days, and I hear there may be some snow in the near future. I suppose it’s to be expected in New England in winter. Stay warm and dry, and have a great week!