Steph went apple picking with friends yesterday. She brought home- well, apples. A few other things as well, like doughnuts. Mmmm. But those apples were just sort of sitting there in a bag on the counter, and I felt something needed to be done with a few of them, because, you know, what if we don’t eat them fast enough, right. Right. And I just happened to have one sheet of puff pastry in the freezer. The result? Why apple turnovers, of course! They look pretty darn good, don’t they? 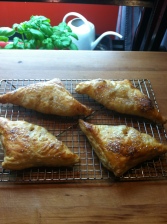 I like baking in Fall and Winter. It’s not so hot outside that the house gets too hot with the oven on, and there is just something about the smell of something baking that makes these seasons seem more right. Especially if what is baking includes “cookie spices”- cinnamon, nutmeg, ginger, and the like. I think of those as part of the smells of Fall, along with leaves, and pumpkins, and cider. In Winter, it just makes things feel more cozy and warm to have something baking in the oven.

We have one more chili trip in the future. This weekend, actually. We hare headed to Kingston, NY for the Hudson Valley Regional Cook Off at Kingston Harley Davidson. We are not cooking, but will be helping out in the judging tent. We are essentially retired from cooking now. Next season, we will be serving as Chief Judge and Scorekeeper at many of the Northeast cook offs, so it really isn’t going to be practical to compete. I will miss being out among the booths and enjoying the fun of interacting with people, but I will not miss all the prep work! In some ways, running the judging area is easier, especially from a prep point of view, but by the end of a cook off, we are still exhausted. More of a mental than physical tiredness, but bone tired, just the same.

We will be staying at the Falkowski Bed and Breakfast, as usual. Nice place, and room rental is cooking dinner and breakfast, which the BaldMan generally takes care of. I usually sit and drink margaritas. It’s a good place to stay!

I took the OldDog for his walk this morning, as usual. It’s a slow process these days, even though we don’t go far, but he enjoys it, and the weather has been really pretty, so it’s a nice stroll. He has been wanting to eat his breakfast outside lately, so when we got back, I made myself a cup of coffee and got his food dish, and went out. I sat on the bottom step of the porch while he ate. Before long, I see two of the chickens, Penny and Belle, sneaking up between him and the house. They stuck their thieving little beaks into his dish, and stole the kibble, practically right out of his mouth! Now, he’s to nice and polite to complain or chase them off, but I am not. I got them out of there, and wouldn’t let them back until he was done. Little hussies!

Here’s hoping this weather holds out for a while longer!

Six of One: A Collection of Short Fantasy by M.A. Kropp

Download a free sample in your favorite ebook format at:
https://www.smashwords.com/books/view/354855