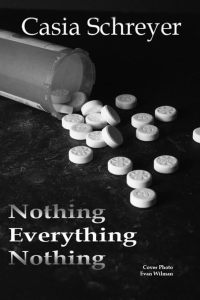 This week, I am posting an interview with Casia Shreyer, a Canadian author whose book, Nothing Everything Nothing, has just come out. The book deals with the sensitive subject of teen suicide.
I’ll put links and other information after the interview.

No one in Molly’s life expected her to pose for topless photos. During spring break, Molly meets a charismatic older boy and suddenly no one but Lance matters – not Molly’s family, and not Brandon, her life-long friend. Anyone who voices concern about the changes in Molly’s attitude and habits is driven away.
When Molly refuses to let Lance sweet talk her out of her virginity, pictures that were supposed to be private go viral. Molly’s reputation is in shambles. Lance wants nothing to do with her, insults her, and refuses to take the photos down. She is ridiculed and harassed and no one can stop it.
Molly is faced with a painful choice – face the humiliation alone, or end her life and never have to feel the sting of rejection again.

And a link to a review on Goodreads.

1) Why don’t you introduce yourself and tell us a little about you?
Well, my name is Casia Schreyer and I live in South Eastern Manitoba, a few miles off of the center of Canada with my husband and my two kids. I’m an avid reader in many genres and I’ve been spending a lot of time reading self-published authors and writing reviews lately. I also like knitting, crocheting, and cooking. I know it sounds old-fashioned but I knit with big, chunky, brightly coloured yarns and I do too much experimenting in the kitchen. Not all of it works out.

2) What’s the story behind your latest book?
I started Nothing Everything Nothing over the summer when I found out that my cousin was in the hospital after attempting to overdose on her medication. She’s fourteen and I’m her godmother. I didn’t know what to do; all I knew was that I couldn’t really help her. She needed a professional. So I wrote the first draft of the novel with one main goal – to write a character similar to my cousin and give her the happiest ending I could manage. I gave that draft to a friend who read it and said “Why are you giving me an outline? 30k is way too short for this project”. About that time Robin Williams killed himself and everyone started talking about depression and suicide. I read a lot of blogs and I knew that this story had suddenly become MORE than I had intended. So I expanded it with the purpose of making it believable and honest while treating the issue with compassion and respect. After the major revision, which included 2 dozen new scenes, 1 dozen complete scene rewrites, and hundreds of smaller tweaks and revisions, it underwent 2 smaller revisions and two fine-tooth-comb edits.

3) Do you remember the first story you read, and the impact it had on you? If not, tell us one that did have an impact.
I come from a family that had books in every room of the house, including the bathroom. I have been read to since infancy so I doubt I can remember the first. I have some of the kids books my parents read to us though. I think the first stories that really impacted me are: The Hobbit, The Raven (by Poe), and one of the stories from The Jungle Book titled Riki Tiki Tavi. These were read aloud to me, the first two by my father, the third by my godfather who are both wonderful story tellers. Someday I hope to write a story that a story teller will want to read to his nieces and nephews (biological and honourary) around the campfire as my godfather often read to us.

4) When you’re not writing, how do you spend your time?
Oops, I answered this above. Aside from my other hobbies I have a lot of chores and yard work to keep up. One of my kids is still home full time, and she’s a handful. I spend a lot of time marketing this book, too! Or at least that’s my excuse for spending too much time on the internet.

5) What is the greatest joy of writing for you?
My favourite part of writing is world building. But after moving out of the fantasy genre for a while and completing this novel, I think the greatest joy is the characters and weaving their stories. I love watching the characters become real as little details of their lives are revealed. For example, I have Molly’s mom scold her for swearing, because that’s what mom’s do. When Molly’s stepdad is reminiscing about the day he met Molly’s mom, he mentions that she was swearing like a sailor. That wasn’t planned, just a little detail that was revealed to me along the way as the characters gained lives of their own.

Book Launch Info: Book launch will be held November 27 at the Transcona Library at 111 Victoria Ave E in Winnipeg, Manitoba, Canada. Time: 5-8pm. Admission is free and $2 from every paperback sold will go to Kids Help Phone.

Amazon (Paperback is now linked through to all Amazon International sites)

$1 from the purchase of every ebook before the end of November will go to support Kids Help Phone as well.