We took Lambeau to Arlington, VT on Saturday for the Vermont State Chili Cook Off. He loves cook offs. People fuss over him, and he gets lots of attention from the cooks. We were originally planning to stay overnight on Saturday since this is a late turn-in cook off, but there was some question as to whether it might get cancelled, so by the time we wanted to make a room reservation, there weren’t any dog friendly rooms available. It’s not a horrible trip, about two and a half hours, but the trip back was pretty crappy.

Lambeau is one of those odd dogs that isn’t particularly fond of riding in the car. He doesn’t get carsick (thank heaven!), but he’s just not really comfortable. He loves going places once we are there, but the “getting there” part is not his favorite. For short trips, I have a seatbelt leash that clips to his harness, but for longer trips like this one, we put his crate in the car. I like to have his crate with us for cook offs, anyway, since he’s used to settling down in it and that can be good at times.

He loved being in Vermont! The cook off was at a park, and it had a big field and walking paths around it. We got our almost a mile walk in on the path which is good because that way, he didn’t have to be leashed up in the judging area without much room to exercise. I should have brought his long line and a ball or toy to throw. Next year, I will.

He made many new friends on Saturday. Not only did all his cook friends fuss and pet and play with him, but there were three kids there with their Mom and they kept coming back to see him. Several other people who were enjoying the park stopped to say hello, also, as did many of the judges for the chili. So, my people-loving pup was in doggie heaven for the day!

It also gave me the chance to work on his behavior around people, as he still gets over-excited at times and can be a bit rude with jumping and occasionally mouthing still. But he’s getting better at least at listening to me right away and backing down when he does get a bit wild. And, of course, just being in a new place is a good experience. The only bad part was the storms that blew through while we were there. He hasn’t shown any issue with storms up to now, and the thunder didn’t seem to affect him. But we were in a pavilion with a metal roof and when the rain was pounding down, he didn’t like the sound of it hitting the roof. He wasn’t quite as bad as Murphy, who was terrified of storms, but you could tell he wasn’t comfortable. I just hope that doesn’t cause him to be more fearful when we get a storm here at home. And we can chalk up one more different experience for him.

The ride home wasn’t all that great. Both the Baldman and I were tired, and he has a summer cold, so driving at night wasn’t the most awesome thing. And we left Vermont late enough that most of the restaurants and even pizza places were going to be closed by the time we got home. Luckily, 99’s kitchen is open late, so we ordered take out from them and picked it up on our way. It was good to get home, unload the few things we needed from the car- like Lambeau’s crate!- and just relax. Next up is MA State, and he gets to go to that one, too. But that’s only about 45 minutes now, and it’s normal afternoon turn-ins, so that will be  better all around.

All in all, it was a good trip for Lambeau, and he was a very good boy for me. I’m always very proud of him when we take him to places, even new ones. He’s generally very good and doesn’t get freaked out easily. He loves his adventures!

Here are a couple of pictures of him enjoying his daytrip:

Here his is on our walk around the park:

And here he is trying to convince me he could be a fire dog: 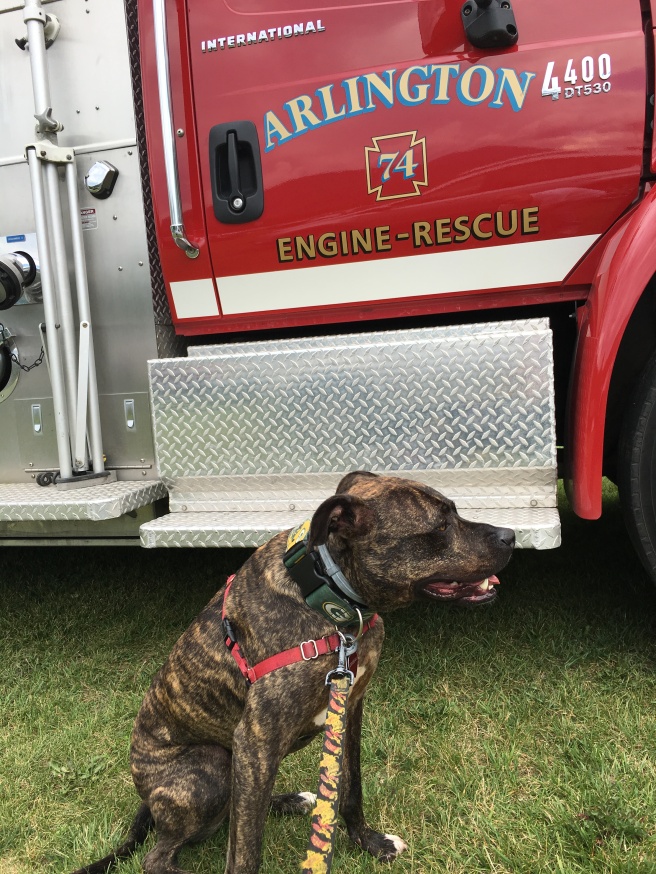 And one on our way home of the mist coming off the mountains after the storm:

When your family runs the mining operation on a planet that supplies a long-depleted Earth with needed resources, there are bound to be those who would like to see you fail. After five years away with the Interstellar Security Corps, Kaili is coming home after the death of her grandmother as a key participant in the ceremony to install her sister as head of the company and the ruling planetary council. She and her partner land in the middle of old resentments and new threats.

Like all of her people, Kaili is gifted with psi abilities developed over generations living in close harmony with their world- what outsiders see as magic. The ceremony investing her sister with her new positions will be a formal ritual, and Kaili, as her sister’s closest relative, will complete the binding Circle.

Accidents and unrest are growing in the mine operations, and Kaili and her partner, Jeff, uncover evidence that her sister will be formally challenged at the ceremony. When Kaili goes missing right before the ceremony, and returns with no apparent memory of the past few days, Jeff knows something is not right. He will need to use a little magic of his own to make sure Kaili is ready to face the family’s enemies. If not, it could mean both sisters’ lives.

“Circle Unbroken is an awesome mix of two genres, masterfully woven together into a strong story.” From a review on Readcommendations

“Six of One: A Collection of Short Fantasy” by M.A. Kropp is a set of six short stories, set in varied worlds of magic and mayhem. Included are:

A Girl, An Elf, and a Shoe– An elf causes a mix-up the day before the big race
With Pen In Hand– A wizardly writer creates his own audience
Impish– An apprentice sorcerer lets the imp out of the bag- or box
Where Angels Tread– What if Heaven and Hell are more like The Sopranos than Seraphim? A noir style story in two parts, where a vital piece of Heavenly equipment goes missing.
Siren Song– A young accountant has an encounter with a mermaid and her companion and must think quickly to save his father.
Peepers– A young man visiting from the city finds the nighttime song of some tiny frogs irresistible.

A hundred years after Earth’s final environmental collapse, the human population is scattered, living in deep caves or underground to escape the heat and radiation that still ravage the planet. But some species adapted better to the changes. Sam, a genetically engineered lizard, is part of an ongoing program to discover what allowed his kind to evolve so quickly. Intelligent, able to communicate, and make decisions, is Sam a person or an experiment? When another survivor of the devastation threatens the promising food crops being developed, Sam may be given the chance to prove himself.“Survival of the Fittest” is FREE until July 31. Coupon code is WW27A.

The climate is ruined. Cycles of torrential rain and snow alternate with heat waves that make it dangerous to be outdoors for long. Most of the farmable land is either underwater from rising oceans or destroyed in the severe weather cycles. Food is in short supply, and Beni Oligowma controls the distribution of what there is in his local area. Grocery store owners Frank and his father have to live with whatever Beni decides is fair. And that usually means Frank can’t afford the best that’s available. When a university student returns home with an experimental method that may provide a new way to grow food, Frank is determined to help the system succeed, even if it means a confrontation with Beni.
“Feed My People” is a short story, set in a dystopian science fiction world, and is free without need for a code.