Well, it wasn’t a full vacation. Just a weekend, and there were obligations along with the fun, but it was a good weekend, so I’m counting it!

A couple of weeks ago, we went to Arlington, Vermont to be Chief Judge (the BaldMan) and Scorekeeper (me) at the Vermont State Chili Cook Off. We always enjoy this one. It’s a very laid back cook off since they run it in conjunction with the annual fireman’s carnival there. So, instead of needing to be there at eight or so in the morning, we can leave home later and still arrive in plenty of time. Turn in times for the chili are five, six, and seven, rather than the usual beginning time of noon. The downside, of course, is that we get finished much later than usual and then are facing the drive home. Last year, we did go home directly, but it’s a long and tiring day even with the later start, and that drive was tough. It was also raining last year, and that made it worse. So, this year, we decided to stay overnight.

We also bring Lambeau to this cook off, so we needed to find a dog friendly motel. We sure did! It was the Harwood Hill just outside of Bennington. Really nice place, and the girl in the office even told us about a dog park just up the road from them where we could take Lambeau after the cook off and let him stretch his legs out a bit. He does need to be on his leash all day at the cook off, and he needed to burn some physical energy by the time we were done. And the motel has a whole bunch of neat sculptures on the grounds. Really great place.

On Sunday, we took our time getting home. We stopped in Williamstown, MA at the Mountain Meadow Preserve and walked the meadow trail. It’s a beautiful place. They mow paths around the meadow and hill, but leave the rest to do its own meadow-y thing. There were lots of wildflowers, birds, and butterflies. I’m sure there’s other wildlife there, also. And then we stopped in Shelburne Falls, MA to visit the Bridge of Flowers and the glacial potholes at the falls. We had to do the bridge separately, because dogs aren’t allowed on the bridge itself. I fully understand why. It’s a narrow path across and there are lots of people. Even with a friendly dog, things could get out of hand too easily. So, I sat with Lambeau at one end of the bridge while the BaldMan went across and came back, then he took Lambeau around the street to the far end while I went across. While we were waiting, Lambeau discovered the boulder fountain they have at the entry to the bridge. It’s a big rock with a shallow depression in the top and a fountain running up through it. Lambeau thought it was the perfect doggie water bowl!

The bridge itself is breathtaking! We’d been there before early in the year, before a lot of the flowers and plants were in full growth, but this was really impressive. So many flowers, shrubs, trees, and more! All in full growth, with gorgeous flowers and foliage. If you get the chance and you love a good garden, you should go see it. After that, we came home.

Lambeau was such a good boy all weekend! He saw lots of old friends, and made some new ones. He rarely tried to jump on anyone when they were greeting him, and he behaved very well at the motel and on his leash at the falls. He may actually be learning something! He gets to go to the Massachusetts State Cook Off this coming Saturday, but that’s local so it will only be one day.

I will leave you with this collage of some of the pictures I took in Vermont: 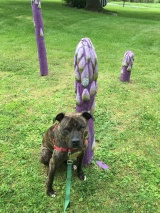 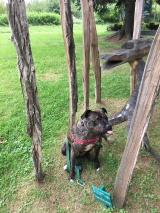 Not sure I’d sit on these!

Mt. Greylock is out there

This little guy was tucked in one of the gardens 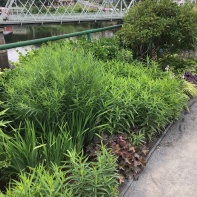 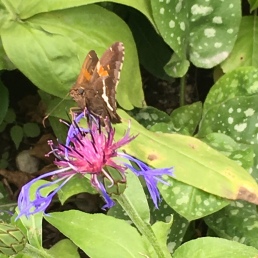 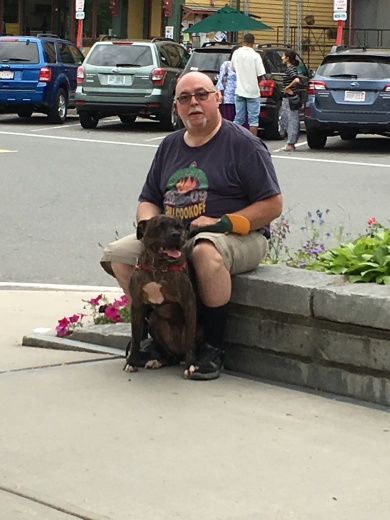 Lambeau and the BaldMan waiting nicely

Five and Daemon, the Yo-Yo Files #1, is a short novelette in an urban fantasy setting, with elements of the supernatural and humor.  Learn more here