No, not the Kevin Costner movie. That we will just leave alone.

This water world is my new aquarium. I used to have several tanks, including a 55 gallon planted community tank, and a 90 gallon African cichlid tank. But, with one thing and another, including our move from NH to MA, I didn’t have any for a few years. I can’t have a big tank here in the townhouse without special dispensation, and really don’t have room for one, anyway. So, I decided to go the opposite direction. I am in the process of setting up a 10 gallon nano tank. It will be a planted tank to house a few fish, some shrimp, and maybe a snail.

Lots has changed since I had a planted tank. For one thing, rimless tanks are much more common than before. For those not into fishkeeping, you know how a lot of aquariums have black plastic frames around them? Well, glass working has gotten to the point where that extra rigidity is no longer needed. (The plastic never was the thing that held the tank together. That was, and still is, the silicone between the pieces of glass.) These newer tanks are sleeker and more visually attractive. Here is the one I got:

After the tank, I needed all the stuff to go with it. Most of it was fine, and took a little research to decide what I wanted, and then I ordered/bought it. The light was a nightmare unto itself, though. Planted tanks are fussy about light. You need enough to encourage the plants to grow well, but not so much that it also encourages algae. There are a lot other factors that go into the equation also, but I decided for this one, I am going low tech- medium lighting and no added CO2. But there were a few things I did want on the lighting end. A timer, so I don’t have to remember to turn the lights on and off was the biggest. And the BaldMan liked the idea of blue “moonlights” at night. I mean, I like the moonlight look, too, but I was more concerned with getting the light right for the plants. I thought I’d found it all in the Current Satellite Pro+. Fully customizable across all the colors- white, red, blue, green. So if need be, I could dim the intensity of the lights since I am planning mostly low to medium light requiring plants. It had a built in timer, and several pre-programmed settings that were cute, but not necessary. Problem was, the thing didn’t work. Oh, it turned on at the right time, but it would jump out of timer mode and into one of the other settings at random points during the day. It would dim the lights to the blue in the evening, but then, all of a sudden, it would pop back on full bright. I ended up sending it back and getting a Fluval Nano Planted clip-on light. It is controlled by an app, which is reasonably easy to use, and best of all, it works just like it’s supposed to.

With all that figured out, we spent yesterday fussing with electrical stuff (lots of cords to manage), and I did some tweaking of the hardscape (that’s the rocks and wood and substrate part), and I think we have it. I have a few plants, and ordered more. The order should be here by the end of the week, so I can plant it this weekend. Then we move into the fishless cycling phase to get the water parameters settled down so I can add fish.

Here’s the set-up so far, with hardscape and equipment in place. The filter isn’t hooked up yet, but there’s no water in there, so that will happen after I plant it. I’m happy with it, and can’t wait to see it with plants in place! 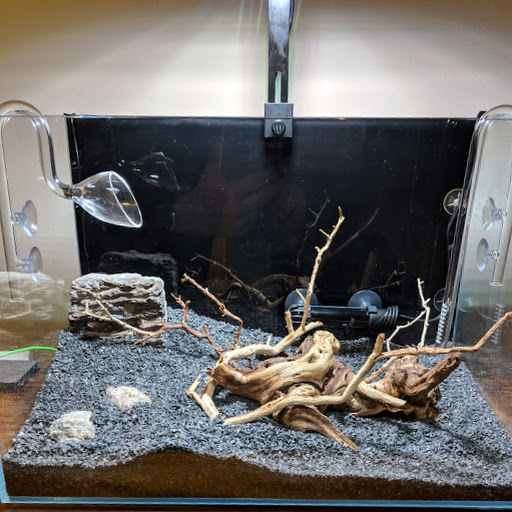 Medusa “Deuce” Grainger is smart, confident, and as good a pilot as she is a poker player. A freelance shuttle jockey working for an independent terraforming company, she’s left her former life, and her father, behind. Mostly.

Now, her AI has downloaded another Personality off a wrecked ship, and he’s acting oddly ever since. Someone wants to sabotage her friend’s company out of business, evidence of tampering is being corrupted, and people have died.  With an investigation looming that could shut down the company and cut off her main source of income, it’s up to Deuce to figure out what’s going on, and how all the pieces fit the puzzle. Along the way, she reconnects with an old friend and discovers someone is stalking her. Deuce will need to connect all the dots fast, because more lives are at stake than anyone suspects.

Five and Daemon, the Yo-Yo Files #1, is a short novelette in an urban fantasy setting, with elements of the supernatural and humor. Learn more here